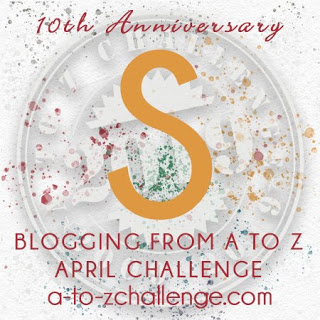 We are pleased to participate in the A to Z Blog Challenge (http://www.a-to-zchallenge.com/).  The Story Crossroads theme for this year is Golden…And All Things That Glimmer.  Each post highlights golden items from a folktale from around the world. Each time you have to wonder, is something that is golden a blessing, a curse, or both?

What has inspired all this gold?–The Golden Spike with the 150th Transcontinental Railroad and the Spike 150 Grant for this year’s Story Crossroads Festival.

As the whole Golden theme is due to the Golden Spike, this story is shared despite not being a folktale. Though, having such a way to travel did involve “the folk” to make it happen with many different cultures including the Chinese, Irish, recently-freed African Americans, Shoshoni, Paiute, Washo, and Mormons (today preferred to be called members of The Church of Jesus Christ of Latter-day Saints).

Locomotives traveled faster than any other way. Asa Whitney petitioned Congress in 1845 for grants to build railway. Many routes considered. The joining of two railroads–Central Pacific and Union Pacific–took place on Promontory Summit, Utah on May 10, 1869. Golden spike missed twice but still considered “done” by telegraph heard around the world.

These “spears” are not weapons but are due to two mountains that looked like golden spears. This story has a “Rip Van Winkle” feel to it. Thankfully, the mother did know what happened to her two children probably by some messenger of the Fairy Queen.

This story is almost exactly like the “Golden Goose” and well as similar to the “Golden Elephant Tusks.” Though it does not reveal it in this link below, but I heard that the father was reincarnated as the swan and explains more of the concern the swan has for the family.

A Princess tosses a snail out of garden…what many people would do. It is tough to be cursed for a simple act, especially when no malice was meant.

The opening and closing of the story references “Roland,” one of the 52 bells of a carillon tower. “Roland” sings for victory or tolls for fire. On top of this tower is a golden dragon weather vane and this story explains why.

Cinderella stories do not usually begin with the Cinderella character already a princess.

Cinderella stories often involve a ball or party of some kind. This party is for more than one night. One can be careful the first night….

This feels a little like the “Golden Swan” above or the “Golden Goose” or “Golden Elephant Tusks“…only that there is death involved.

This is really the same story as “Golden Flute” but this instrument is “Golden Reed Pipe.” Otherwise, the same.  Though, this is more complete than the link found for “Golden Flute.”

Please share in the comments…or anything on your mind.

While you enjoy this blog, Story Crossroads has year-round offerings including the culminating Festival on May 15, 2019 with free performances May 13-16, 2019 (see schedule here: https://storycrossroads.com/2019-schedule/.

We thank our funders such as the National Endowment for the Arts, the Utah Division of Arts and Museums, the Western States Arts Federation, Utah Humanities, the Utah Department of Heritage and Arts (Spike 150), the City of Murray, the South Jordan Arts Council, Utah Valley University and many other businesses and individuals. Join us in the support by attending or donating or both! (Click here to donate or get tickets.)