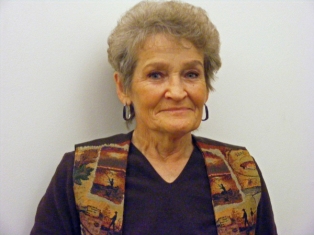 Carol Esterreicher received the 2011 ORACLE award for Leadership and Service in the Western Region through the National Storytelling Network, especially with establishing storytelling on www.nowplayingutah.com.  Carol is a retired school Speech-Language Pathologist and has been an avid storyteller throughout her career as she has incorporated a thirty-year continuing membership in the Utah Storytelling Guild and a ten-year membership in the local Ring 193 of the International Brother of Magicians.  Her love of words (and playing with words) shows in her storytelling.  Carol’s book, Now You See It, Now You Don’t—Instructional Sequences for Language Development, includes text that teaches how to apply Bloom’s Taxonomies so that children can benefit from the storytelling and performance of novel and easy magic tricks at all developmental levels. Her book, SCAMPER Strategies—FUNdamental Activities for Language Development explores ways to Substitute, Combine, Adapt, Modify/Magnify/Minimize, Put to other uses, Eliminate, and/or Reverse and Rearrange story grammar elements.

She has presented storytelling programs in public libraries, schools, senior centers, assisted living centers and often at the Weber State University Storytelling Festival. She also tells yearly at The Utah Gallivan Center Lunch Bunch Series, and at the Florida Storytelling Association’s Storytelling Festivals.  She presents a story and craft event nearly every month at the South Jordan Gale Center of History and Culture. Her favorite stories are told using word play styles.  Carol also likes to celebrate Jewish tales of Chelm, lesser known and humorous urban legends, and Aesop’s fables. People know her best for her spoonerisms and word play applied to fairy tales. Her audiences have included pre-school through senior age groups.  Her favorite stories are told using word play styles.  She especially enjoys sharing personal family stories and encourages children and adults to revel in telling their own life stories too.  She has provided storytelling residences in the Murray School District and at the Murray Heritage Senior Center.

I taught Murray Heritage’s 10-hour residency. Twenty people participated and nine decided to compete to be one of two winners to represent Murray Heritage at the Murray Storytelling Festival.

We addressed concepts that noted national storytellers promote at workshops and festivals. Examples:

As participants practiced their stories, I pointed out their successes as they applied these guidelines as Donald Davis elaborates on this theme via his DVD:  See It, Tell It, Write It.  We talked about types of stories and discussed how our personal stories tap into experiences held in common by others. His book, Telling Your Own Stories, was suggested as a useful source of questions that you help you discover your own stories.

(2) Elizabeth Ellis (From Plot to Narrative). We explored her suggestions regarding storyboarding and each participant practiced simple (stick figures allowed of course) storyboarding at least one episode in class.  A shared several “vignettes” of memorable times with my father.

3) We addressed the important aspect of eliciting the audience’s sensory experiences as we deliver our stories with visual, auditory, kinesthetic, tactile, olfactory, and gustatory elaborations. Doug Lipman’s book, Improving Your Storytelling was used as a reference.

4) We experienced the importance of practicing our stories so that we comfortably fit them into the allotted time frame for the specific event.  Some were surprised to learn that they had to revisit their stories and determine, as Doug Lipman would advise, the MIT–the most important thing.

Power Point background slides helped to pace the activity and to facilitate attending to the focal topic of the lesson as we progressed. Story reference books were available every time for people to review and a bibliography was provided.  The center program coordinator provided water and reusable name tags to be use each time.  A battery-powered and hand-held microphone encouraged participants to become accustomed to using it and to encourage them to speak up so everyone in the room could hear them.

This year we have a 15 hour instructional program planned plus an extra hour of coaching the winners in preparation for the Murray Storytelling Festival.  In the 2015 December-January Murray Heritage Newsletter we will announce the new classes and will invite and incorporate new participants as well as “veteran” Murray Heritage Storytellers. This year’s format will be based on the successful 2014-2015 sequence with various adjustments and elaborations.  Expectations are high and remembrances of 2014-2015 still linger.

Your chance is here...we know you are a professional and can bring a new perspective to the art of performance storytelling. Let us know and apply to be a virtual workshop presenter with the All Things Story series through Story Crossroads. See link in bio and find “Get Involved” header in LinkTree. #StoryCrossroads #AllThingsStory #VirtualWorkshop #ApplyToday #WorkshopFacilitator #ProfessionalDevelopment #ContinuingEducation
A virtual option for Jim Luter’s funeral services from October 9, 2021 but available to view October 10, 2021–